How to stop your distractions from controlling your day 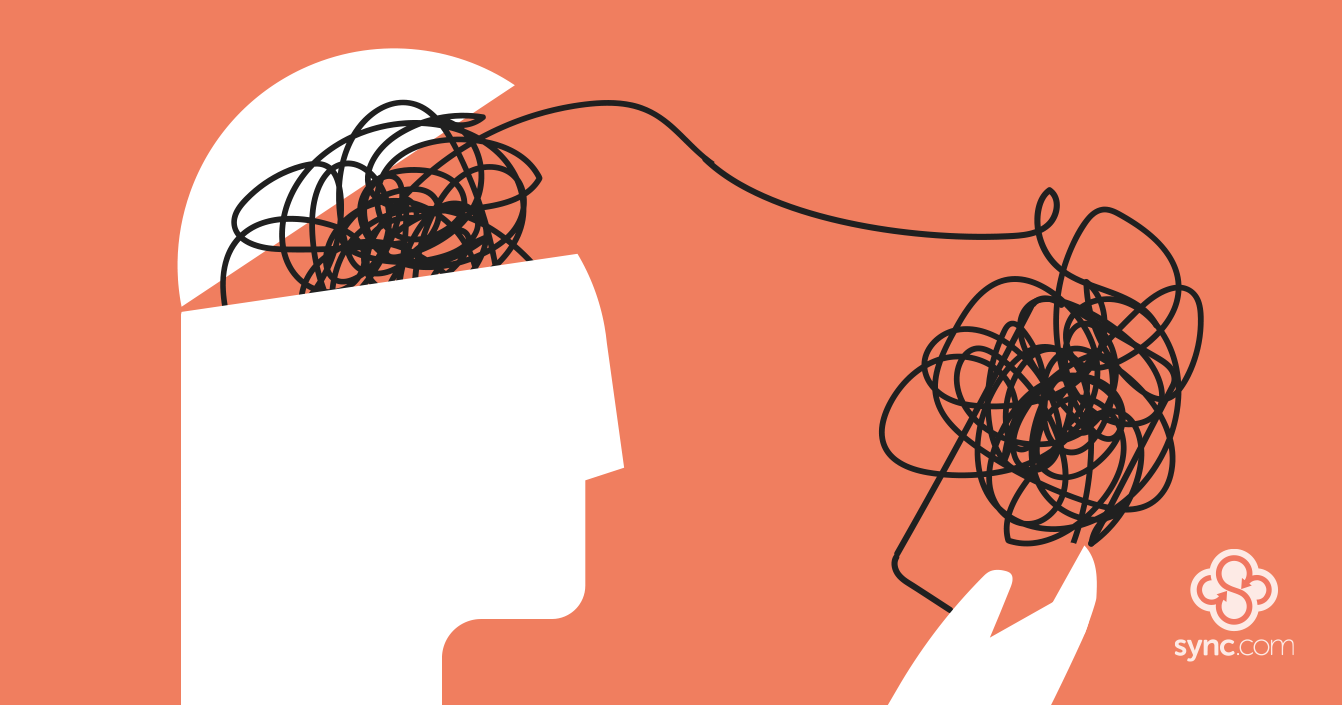 Being productive is about mastering your attention, not making to-do lists, according to Nir Eyal, author of Indistractable. Here’s how to get back on task and control your life.

This is the first interview in a new series by Sync.com called Five Questions With, in conversation with global thinkers about how we can lead better lives.

When Nir Eyal looked up from his phone and realized his daughter had left the room, he knew he had a problem. “I sent her a clear message: whatever was on my phone was more important than her.” This was only one of many distractions that Eyal, author of Indistractable: How to Control Your Attention and Choose Your Life, was using to escape uncomfortable emotions in his life. “I felt awful and it was time for me to figure out what the hell was going on.” He embarked on five years of research to become what he calls “indistractable,” so he could do what he said he was going to do: lose weight, eat healthier, and be present with his family.

While it’s not uncommon for many of us to spend time on our phones, the urge to be distracted has increased during COVID-19: putting the laundry on while working from home, checking the news more often, and spending hours on Instagram. But, Eyal says we can’t blame distraction as a character flaw. There’s something deeper happening called, internal triggers. “We’re seeking to escape uncomfortable sensations,” says Eyal. “It’s the desire to escape discomfort whether you’re feeling bored, lonely, tried, anxious, or stressed.”

If distraction is any action that pulls you away from what you plan to do, then traction is an act that you plan with intent and aligned with your values. We’ll still get distracted sometimes, but we can arm ourselves with techniques to get back on task. “It’s the skill of the century.” We recently spoke with the author to find out how we can leave the office at the end of the day and stop worrying about work:

Kristen Marano: COVID-19 has created a work from home culture. Why do we tend to be more distracted at home than in the office?

Our schedules have blown up. I read an article a few days ago that Google is seeing an increase in the number of people searching, “what day is it?” [laughs]. There’s a market increase in people searching that question, because the structure of our days has evaporated and for many people, that’s dizzying. Søren Kierkegaard said, “anxiety is the dizziness of freedom.” Because our day has so much freedom, we’re becoming anxious. When we decide our schedule, we perform better than when our schedules are imposed by other people.

We have new external triggers. External triggers are the pings, dings, and rings in our outside environment that can lead us towards distraction. The norm used to be that we were distracted because our co-worker stopped by our office and said, “hey, did you hear the office gossip?” and that would take us off track. Now, it’s not our colleagues, it’s our kids.

We’re feeling more internal triggers throughout our day. If you keep checking the news looking for a way to calm your anxiety, you’re only going to be more anxious. Based on what news you read, media companies are in business to keep you reading the news. We need to be aware.

Don’t blame or shame yourself for being distracted. Claim responsibility

KM: How do we identify our internal triggers?

NE: Mastering the internal triggers is the first and most important step of four to becoming indistractable. We want to break mindless habits like, “I’m bored: let me turn on the TV. I feel lonely: let me check Facebook. I feel uncertain: let me check the news.” We can’t break these habits before we recognize, “what is this ugly, uncomfortable sensation that I’m trying to escape?

Most people when they become distracted fall into two buckets: the blamers or the shamers. The blamers blame things outside of themselves, “it’s the technology that’s addicting me. It’s the news. It’s my boss.” You can’t change that stuff.

The shamers take it on the inside. They shame themselves, “oh, there must be something wrong with me. Maybe I have ADD. There’s something broken in my brain.” The shame cycle leads to more internal triggers, which makes us more likely to escape the discomfort with distraction.

Claimers take responsibility and acknowledge that these distractions aren’t your fault. You didn’t invent Facebook. You didn’t invent the news. It’s not your fault, but it’s your responsibility. You can’t control the urge to smoke a cigarette, check the email, or scroll through the news. What you can control is what you do in response to the urge.

The 10-minute rule: resist the urge to be distracted

Don’t use abstinence to resist an urge, because it can backfire. Instead, we can tell ourselves, “I’ll give into the distraction, but not right now.” This is called the 10-minute rule: we can do whatever we have the urge to do, but in 10 minutes. We set a timer, put it down, and for those 10 minutes we have a choice to make: we can either get back to the task or bring awareness to that sensation with curiosity rather than contempt. Contempt would be blaming and shaming. Curiosity is about exploring that sensation: “where is the urge coming from? What am I experiencing in my life right now?” Jot down some of those sensations and sit with them for a few minutes. Nine times out of 10, when that 10 minutes is up, you’ll already have resumed work and effectively disarmed the internal trigger. 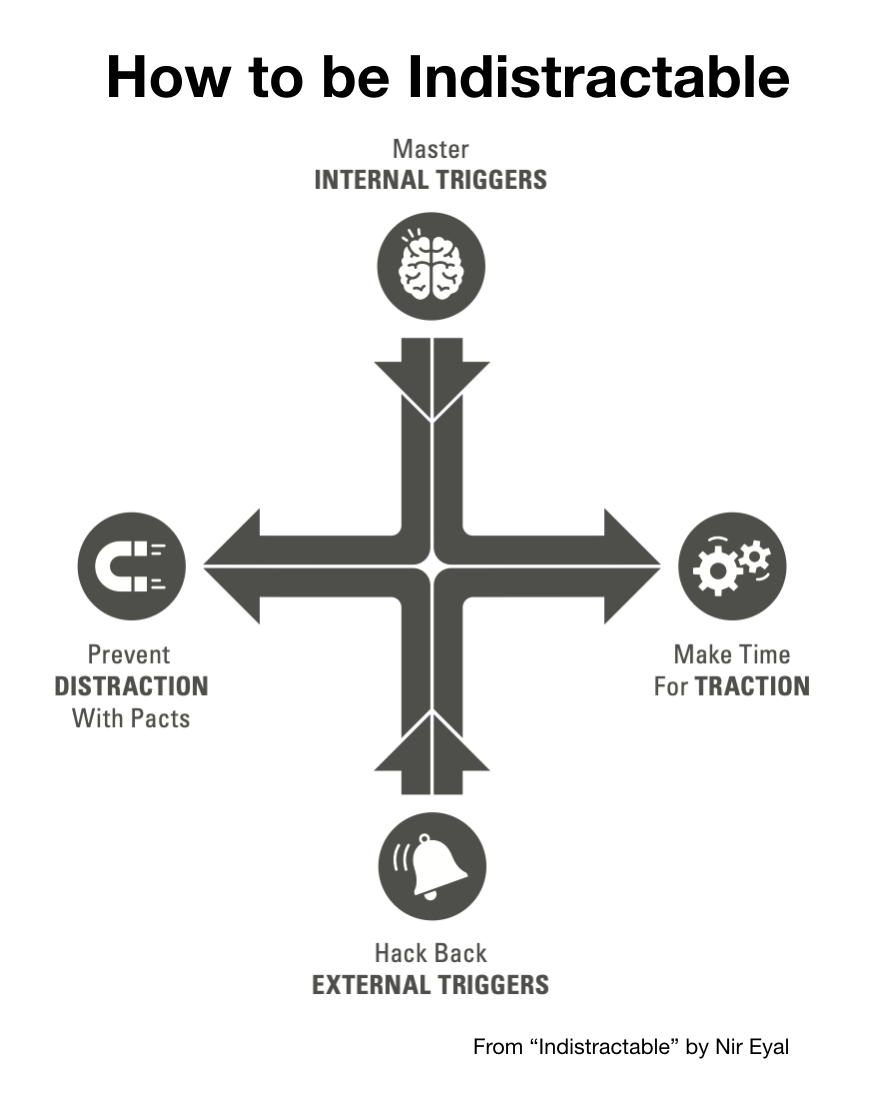 To-do lists are bad productivity advice. Instead, plan your time

KM: How can we manage unexpected events or asks that come up during the day?

NE: If there’s a mantra for this book it is, “the antidote to impulsiveness is forethought.” We want to take time in advance to create our calendar, called time-boxing. Once we start the day, we need to follow the calendar. Everything that’s not in our calendar is a distraction.

People I’ve interviewed in executive roles, do this already. They have someone who manages their calendar and they plan out their day. What they don’t do, but what most of us do, is let their to-do list run their day.

Most people think good productivity advice is to keep a to-do list and tick off items. The problem with to-do lists is that we never finish everything on the list. It’s a broken process; if you bought an iPhone at the store and you brought it home, and it crashed every day, you’d take it back and say, “this is a defective phone.”

People quit hard work because they get in their own way

KM: I sense good habits are driven by doing work we’re passionate about. The idea is that being less distracted comes from being interested and energized.

NE: Yes and no. We over value this troupe of you’re supposed to love your work and follow your passion; that’s unrealistic for most people. If your job sucks and year-after-year you’ve tried and it’s not for you, okay. Not everyone is well suited to every job.

Too many people give up too soon, because at the first bump of difficulty – watching YouTube videos instead of doing hard work – they say to themselves, “oh, I must not be passionate about this. This isn’t my purpose.” Bullshit [laughs].

Everything worth having is worth working hard for. If it was easy, everyone would do it. This is why becoming indistractable is the skill of the century. People don’t quit because they don’t have the capacity; they quit because they keep getting in their own way.

Teaching others leads us to become indistractable

KM: Let’s talk about using, “I am statements,” like “I am indistractable,” or “I am capable of being productive today,” as a way to believe in ourselves and get work done.

NE: The science around affirmations or vision statements shows that they don’t work well. There are several studies that show having an identity or a moniker help us conform to our goals.

This comes from the psychology of religion that when someone calls themselves a particular faith, it’s easier to do what they say they’re going to do. Or a moniker of being a vegetarian. If someone says, “I’m a vegetarian,” they don’t wake up in the morning and say, “oh, I’d love to eat bacon right now.” No, a vegetarian doesn’t eat meat. A moniker creates a dark red line of, “this is what I’ll do and what I won’t do because of who I am.”

One of the most effective things we can do to become indistractable is to teach others. We know this from the psychology of religion. Every religion has an element of conversion, of prophetising or spreading the faith. And, when you convert others you solidify your own belief, “if I say one thing, I have to act in accordance with what I say.” If I preach to others, I’m more likely to become that attribute myself. That’s why I call the book indistractable; the book sounds like indestructible. It’s meant to sound like a super power; it’s meant to sound like an identity.

‘We need to make it socially unacceptable to check our phones.’

When I was a kid in the early 80s, we had ashtrays in our house. My parents didn’t smoke, but when someone came to our house they expected to smoke.

Now, can you imagine if someone walked into your house and lit up a cigarette in the living room? No one would dream of doing that now. What changed? We have laws that say you can’t smoke in someone’s living room? No. What changed is what we call social antibodies. We started spreading these norms and manners that made bad behaviours no longer socially acceptable.

I remember when my mom took away the ashtray. When someone came over and tried to smoke, she said, “oh, I’m sorry, we’re non-smokers.” She used an identity. “If you’d like to smoke, would you be so kind to go outside?” That took guts. That was not something that was common. Now it’s the norm, but back then it took people like my mom to stand up and say, “no, this is who we are; if you don’t agree, please go outside.”

This behaviour is what needs to happen when it comes to distraction. We need to make it socially unacceptable to check your phone in the middle of a business meeting, to scroll Facebook when you’re trying to go out with friends, and to take a selfie when you’re trying to have lunch with someone.

‘The world is going to become more distracting in the years to come.’

My daughter is going to have a world that’s harder to stay focused in and do what she wants to do. It’s imperative that we teach our kids to become indistractable, and we can do that by setting a good example of being indistractable ourselves. There will be a bifurcation of people in the future between those who let their time and attention be controlled by others, and people who say, “no, I control my time and attention; I decide what I pay attention to, and I control my life because I am indistractable.”